Haile Selassie: Why the African Union put up a statue 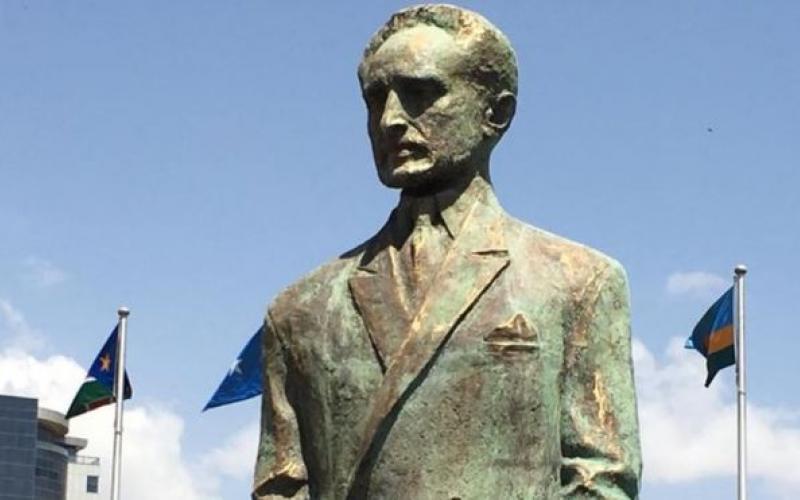 A statue of Ethiopia's last emperor has been unveiled outside the African Union's headquarters in Addis Ababa, Ethiopia.

The likeness of Haile Selassie is being given pride of place outside the $200m (£154m) building in recognition for his role in establishing its predecessor, the Organization of African Unity (OAU).

But that might not be the first thing that springs to mind on hearing the name Haile Selassie. The name is perhaps more easily connected with Jamaican singer Bob Marley and Rastafarians.

So who exactly is Haile Selassie, and how did he come to be worshipped as a god by people living thousands of miles away?

First things first: why is he getting a statue?

Haile Selassie was more than 30 years into his reign when he helped establish the OAU. Its first meeting, in May 1963, was held in Addis Ababa.

Ethiopia - which has never been colonised although it was subjected to a five-year military occupation by Mussolini's Italy - had served as a symbol of African independence throughout the colonial period.

Now other countries were finally gaining independence, and this was a chance to bring nations together to fight against colonisation and white minority rule while also co-ordinating efforts to raise living standards and defend their sovereignty.

"May this convention of union last 1,000 years," Selassie, who spent a year preparing the city for the meeting, told the gathered delegates.

As it happened, the OAU ceased to exist in its original form in 2002, replaced by the African Union (AU).

But his role in establishing the union has not been forgotten, and the statue is a way for the AU to recognise Selassie's contribution.

So, how exactly did he come to be seen as a god?

It all comes down to his coronation in 1930, and a "prophecy" made by a Jamaican black rights campaigner, Marcus Garvey, a decade earlier.

Garvey had told his followers in 1920 they should "look to Africa, when a black king shall be crowned, for the day of deliverance is at hand".

So, when a black man called Ras Tafari was crowned in Ethiopia, many saw that as a sign the prophecy had come true.

In short, the Rastafari movement was born.

Did Selassie believe it himself? Well, he certainly didn't try to dispel the belief when he visited Jamaica in 1966. The emperor was greeted by thousands, desperate to get a glimpse of their god. Among the devotees was the wife of a young Reggae musician, Bob Marley, who was away in the US.

Rita Marley would later describe how she saw nail marks on Selassie's palm as he waved at her. It was a moment of religious awakening, and when her husband returned, they embraced the belief.

Three years earlier, Rastafarians had begun to move to Ethiopia and a piece of land Selassie had put aside for black people from the West in 1948. After the visit, the numbers grew larger. Today, the community numbers about 300 people.

But followers were presented with a conundrum after Selassie died in 1975, a year after he was deposed in a Marxist revolution. After all, gods cannot die.

This was resolved after it was argued Selassie's body was just his earthly body.

Also, it should be noted, Garvey was never a believer. In fact, he was a critic of Selassie.

Opinion is still split over whether Selassie was good for Ethiopia or not.

A Human Rights Watch report accuses him of acting with "official indifference" to famines in various regions of the country and attempting to conceal the famine of 1972-72, in which an estimated 200,000 people died.

He is also known to have violently cracked down on people who opposed him during his reign. 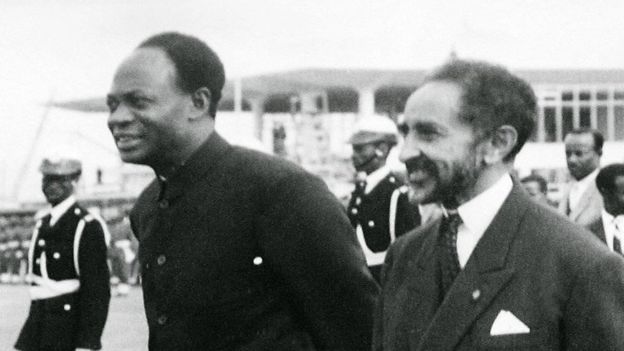 Marcus Garvey was unimpressed after he fled Ethiopia in 1936 following the invasion of Benito Mussolini's troops a year earlier, describing Selassie as a "coward" and calling him out for "the terrors of slavery". The practice was not outlawed in Ethiopia until 1942.

Academic Dr Yohannes Woldemariam has gone as far as to argue that Selassie should be remembered as a dictator. Indeed, he created a constitution which placed all the power in his hands and those of his descendents.

But his supporters argue he was a great leader and moderniser, who was one of the first African leaders to become a figure on the global stage.

His appeal to the League of Nations after his country was invaded is still remembered today - not least because it forms the basis of Bob Marley's 1976 song, War.

What's more, he was not made emperor through a chance of birth. Although born into a noble family in 1892, he was only named leader after impressing Menelik III with his intelligence.

And - as the AU's statue to him reminds people - he was a great advocate for pan-African cooperation, leaving a lasting legacy that continues to have an effect on millions of people across the continent today.