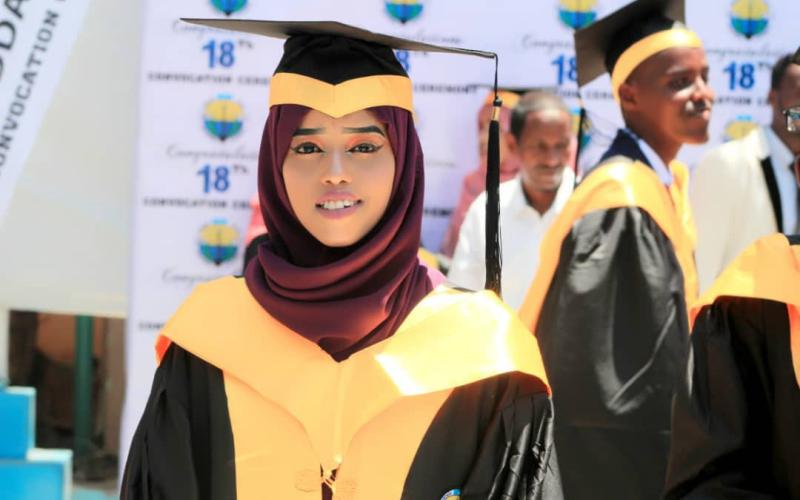 Since I was the youngest person in my family who went to school, my father had a significant influence on my education. In early 2010, my family and I fled to Bal’ad district in the middle Shabelle region. We were eleven siblings, but only four of us were going to school, and we were all preparing for our middle school midterm exam at the time.

My father decided within the first two days that we were in Bal’ad to send us back to Xamar, where we fled from, so that we wouldn’t miss the midterm exam, which was scheduled for a week after we fled. However, my mother did not allow me to go back to Xamar at the time, and she almost made me drop out of school because she was afraid that my older siblings would abandon me if the war breaks out unexpectedly. She was right about her feeling because of the unpredictability of the country’s situation.

After my parents’ long discussion, my father decided to bring me to school in the morning and then take me home whenever the sessions ended. A few weeks later, the war intensified, and my father realized that we couldn’t stay in Mogadishu anymore. That forced my family to again move to Ceel-carfiid in the middle Shabelle region, where we used to commute to a school in Yaaqshiid district. I remember my father calling my mom every morning to make sure whether I go to school or not. Furthermore, Whenever I enter the school gate, I used to see my father sitting with the school watchman waiting for me to make sure I arrive on time.

One day, we were in the middle of the session, mortars had fallen in the neighborhood around the school. Then I saw my brother looking for me, taking care of me, and holding my hand while all the other students were running. My brother used to be close to me because I didn’t know the places very well. After that incident, I told my father not to come to school because I realized that my brother could keep me company and protect me very well.

After a long struggle and various stages of displacement, I finally finished high school in 2014. After that, my father wanted me to join Mogadishu University, where he enrolled me. As a matter of fact, I’m so proud to be a Mogadishu University alumni. One thing that sticks in my mind is that one day my two siblings and I met at Mogadishu University’s chief registrar, who said: ‘your father is eager to educate you and he’s determined to support you to get the highest level of education’.

My father didn’t have much wealth, but he never missed paying the tuition fee to both the school and university for a single month. That’s what I really appreciate about him every day. However, his role in my learning journey is unimaginable, and he played the greatest role in my education.